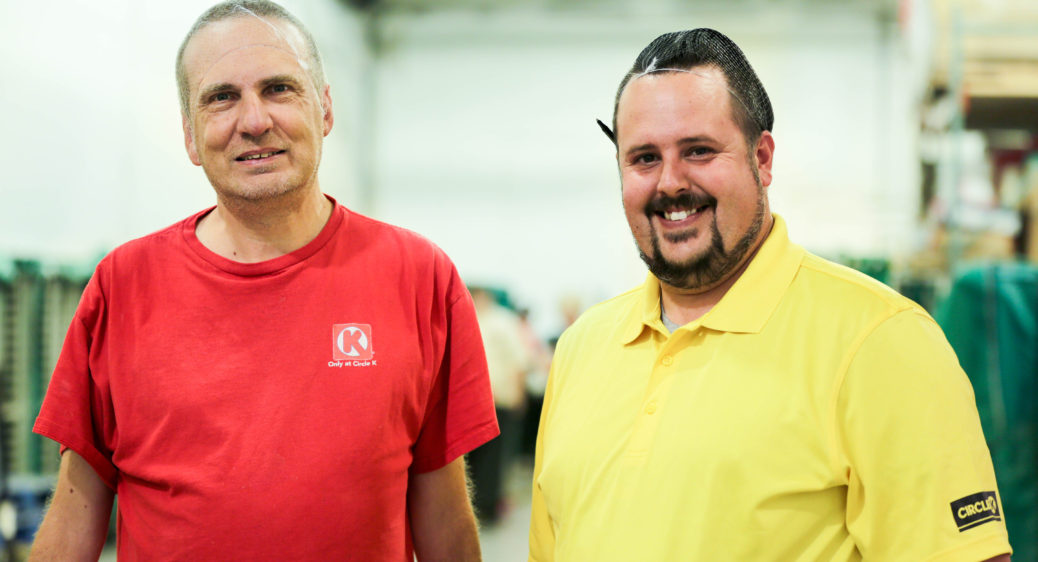 When businesses and organizations come together to create inclusive employment opportunities for people with disabilities, the community becomes even stronger! Through a collaboration between Ardmore, Inc. and Circle K, with support from Summit DD, two new employees, Kelsey and Franklin, are thriving at Circle K’s Tallmadge Road Distribution Center in Akron.

“Some people say that people with disabilities can’t work in the community, well I want to show them I can,” declared Franklin, who has been with Circle K for 9 months now.

Kelsey, previously in Ardmore’s Bridges day program, and Franklin, from Summit DD’s Akron Center, were both ready to start a new chapter in their lives when this opportunity came about.

John Ballard, Business and Community Development Liaison for Ardmore, helped create this opportunity after retiring from Circle K in August 2015. He recognized the need and contacted his former company to ask if they would give Ardmore a try in their Akron distribution center.

“They had high turnover, poor production and a lot of other personnel problems and I thought [Ardmore] could be a good solution,” John described. He also explained to Circle K that employees placed by Ardmore would be trained and have a job coach along with transportation.

Circle K did give Ardmore a try, and Kelsey and Franklin began their new jobs in January.

“This was our very first venture into job development,” expressed Ardmore’s Laura Gerlich, Director of Adult Day and Community Employment Services. “And this was also Circle K’s first time [working with a provider to employ people with developmental disabilities], so we figured it out together.”

John added that expanding into job development and placement just made sense for Ardmore. “We have a lot of experience supporting people in their community in every aspect of their life and (job development) was just a natural extension,” he expressed, explaining that there has been a push by both state and federal governments to create more inclusive opportunities for people with developmental disabilities.

Ardmore also reached out to Summit DD’s Community Supports and Development department, who provided support on how to get started. “Summit DD was really a sounding board for us,” Laura shared.

Staff from Community Supports and Development work with providers and business to help them achieve their goals. They provide trainings, support and resources to private providers, as well as develop new opportunities such as the Summer Youth Employment Program.

“This partnership has been fantastic,” stated Drew Williams, Summit DD’s Director of Community Supports and Development. “Ardmore knew what they needed and knocked it out of the park. We were here to support them through the process.”

Because of this successful partnership, Circle K’s distribution center has increased its production and runs more efficiently.

“It’s been great to have them, and they do a fantastic job,” General Manager Chris Stemm shared about Kelsey and Franklin. “I couldn’t be happier with what they get accomplished in their shift and they absolutely go above and beyond normal expectation. I feel lucky to have them here honestly because they do such a good job at what they do.”

From helping out in the kitchen where fresh bakery items are made to taking out the trash, Franklin and Kelsey have made an impact at Circle K as team members, especially getting bananas peeled and prepped to make banana bread. Their work and social skills have blossomed with the help of their Ardmore job coach and natural supports from their coworkers.

“I like to do stickering, and peeling bananas is good too because you can go at your own pace … I do everything here, most everything,” Franklin said with a laugh. He also mentioned that he really likes working with Chris.

“Sometimes I help with the donuts,” Kelsey shared, agreeing that she also likes working with her coworkers. “I really like being in the kitchen.”

“We provide businesses with qualified employees. Just give them a chance,” Laura stated.

Take a look at our My Story series to read more success stories!