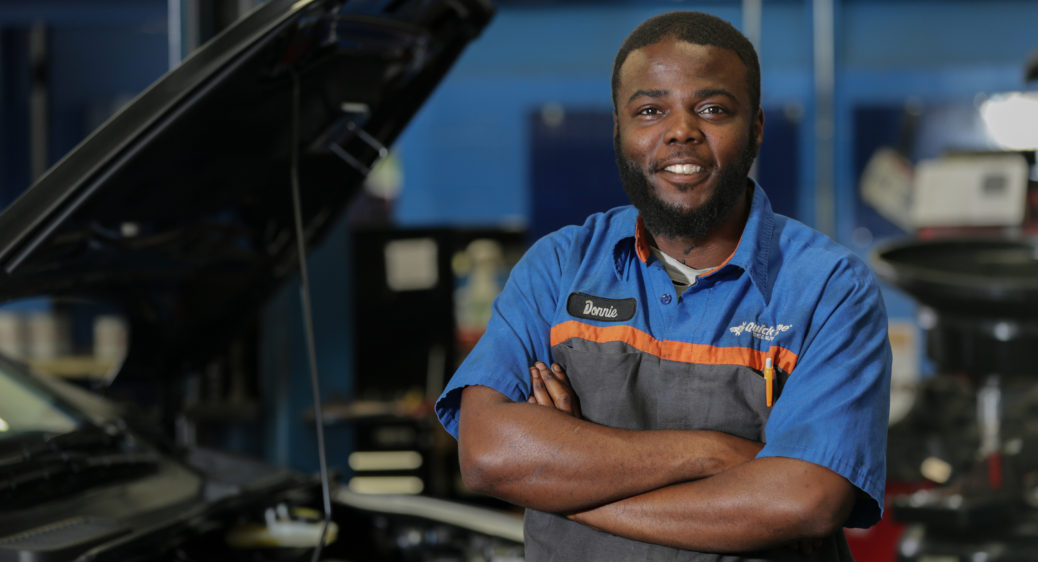 From the start, some people just know what they want to be when they grow up. Such was the case for Donnie. Donnie wanted to be a mechanic since he was a little boy. Thanks to close neighbors, his family and his Summit DD Service and Support Administrator (SSA), this young man is now living his “dream job,” as he puts it.

Donnie shared that growing up he had a neighbor who would let him help as the man worked on his cars. These childhood experiences would become the basis for Donnie’s love of maintaining cars, as well as the foundation for his future career. By sharing that information with his Summit DD service coordinator (or SSA), Peggy Gates, he was able to get connected to the resources to make his childhood dream come true.

“Donnie’s dream job has always been to be an auto mechanic,” Peggy said. “This year he was happy to start a new job at Quick Lane.”

Peggy works with Donnie to coordinate the disability support services he needs to live his life to the fullest. This ensures his everyday needs, such as in-home support, on-the-job support at work and transportation to-and-from work are met. With his daily needs taken care of, Donnie can focus on what he loves most, his work.

At the Quick Lane, Donnie works as part of a supported employment group through Weaver Industries. The Weaver Industries employment service provides extra on-the-job support to individuals with developmental disabilities as they learn new skills and get acclimated to a job.

Donnie’s duties include: oil changes, tire rotations and preparing new cars for the dealership, to name a few. “He continues to add to his skill set while on the job,” Peggy continued about Donnie’s employment success. “Donnie loves everything about the job, his duties, his co-workers and learning new things.”

Donnie is a man of action, rather than words. Everything you need to know about him can be gained by watching him work and interact with his coworkers. It’s easy to see why he fits in so well and his knowledge continues to grow.

True to his character, Donnie offered simple, but meaningful advice for others pursuing their dreams, “Work hard,” he said sincerely. And Donnie lives that advice by example at work. 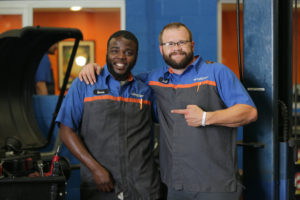 “I don’t want to give him a big ego but, I’m so impressed with Donnie,” joked Donnie’s supervisor Seth, giving Donnie a smile and a nudge. “He’s such a good worker and has great drive. He really shows ownership in his job.” Seth went on to give an example of how Donnie took it upon himself to observe and then regularly start “opening the shop” before his shifts. “He has such willingness to learn new things,” Seth said with respect.

Donnie continues to impress his co-workers from Quick Lane and his supervisors from Weaver Industries. And while he may have already gotten his “dream job” he isn’t done looking toward new goals. “Donnie is now beginning to work toward getting his [driver’s] license,” Peggy added. “And he is saving up for a car.”

Donnie shared that the car he wants is a Chevrolet Caprice. When asked what it was that attracted him to that model, he answered, “Because I like the body.” However, when someone chimed in that those cars also have a lot of power, Donnie grinned and admitted, “Yeah, that too.”

Meet and share stories of others who are following their dreams at SummitDD.org/My-Story.