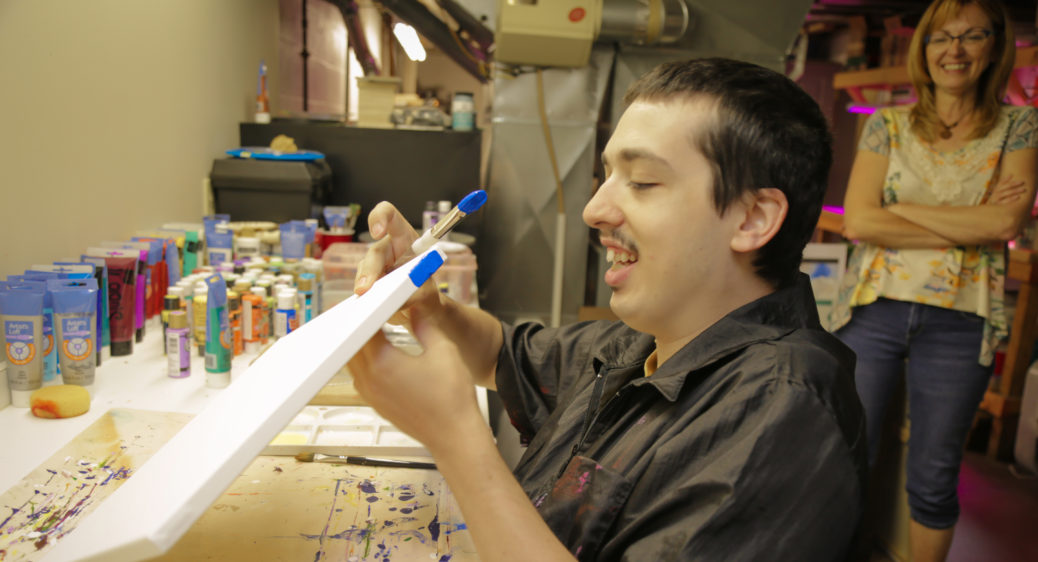 The World Through Nicholas’ Eyes on Etsy

Often times in life we come to a crossroads. It’s easy to see two paths and feel the need to decide between them. But every once in a while an outside-the-box thinker comes along and creates a whole new path of their own. That is the case for Nicholas, who after transitioning out of his day program, decided to start his own business on Etsy, selling paintings and various art pieces.

“We couldn’t do cookie cutter,” shared Nicholas’ mom, Kathie, who uses her endless supply of positive energy to assist her son’s business. Nicholas was previously attending Hattie Larlham’s Constant Companions program with success, but started to feel like it was time for change. “They were so wonderful, but we just reached that point where it was time for the next step,” shared Kathie. “But every step we had to take to get here was a necessary one,” she added. Kathie saw the profound effect art has on Nicholas’ mood, coupled with the passion he had for his work, and jumped in head first. “Now he’s happy and doing what he loves.”

As Kathie described his business, Nicholas buzzed around the living room of his cozy, cottage-style home, affirming her comments with subtle, charming smirks. Nicholas has Autism and does not speak often, but he doesn’t need to. His abstract paintings, beautifully balanced and bursting with vibrant colors, say more than words could. His Etsy page, with over a 100 different paintings, pottery and miscellaneous pieces, has already made over 40 sales, 13 of which were custom pieces. As a testament to their go-get-em attitude, the page has only been live since January!

“He’ll turn up the music, and boom he’s off in his world,” Kathie described what she affectionately refers to as “Picasso Mode.” Nicholas finds not only relaxation in his work, but also a blossoming desire to talk. “Oh, I love the talking and singing,” Kathie confessed with a smile. In addition to making his creations in his at-home art studio, Nicholas also volunteers at The Outreach Center for Deafness and Blindness weekly. Pair this with an organic diet of fresh food pulled from their backyard greenhouse and it’s easy to understand the warmth in Nicholas’ smile.

Sarah Tobin, Nicholas’ Summit DD Service and Support Administrator, or SSA, gushed about his accomplishments with similar fervor. “To see where he is today, is incredible,” awed Sarah. “Some people see a situation and find the negative. I’ve never once heard them come across a problem and say, ‘There’s nothing we can do.’”

“We love her,” said Kathie through an affectionate hug with Sarah. “And I love bouncing ideas off her!” The two often tease themselves about their ability to talk together for hours. “It’s always such an open space to share ideas,” Sarah added, “And it’s so amazing to find a parent that not only knows their child, but that is truly invested in every way in their dreams.”

On top of his new booming business, Nicholas was recently informed his artwork will be on display in Metro Transit Center’s public art space in Downtown Akron, during June and July.

“The thing about Nicholas is, he does not see ugliness. He finds beauty in everything he sees,” tears welled in Kathie’s eyes as she explained what is so wonderful about her son. “It’s not possible for him to judge people. That’s part of what makes him such a good person, he loves people for who they are.” She gathered herself with a long exhale, paused and concluded, “Seeing life through his eyes makes the world a better place.”

So what’s Nicholas and Kathie’s key to success? “If there’s something you want – do it!” said Kathie. As for Nicholas’ future, she gleamed, “The skies the limit.”

Check out Nicholas’ Etsy page or discover more stories like this one at SummitDD.org/My-Story 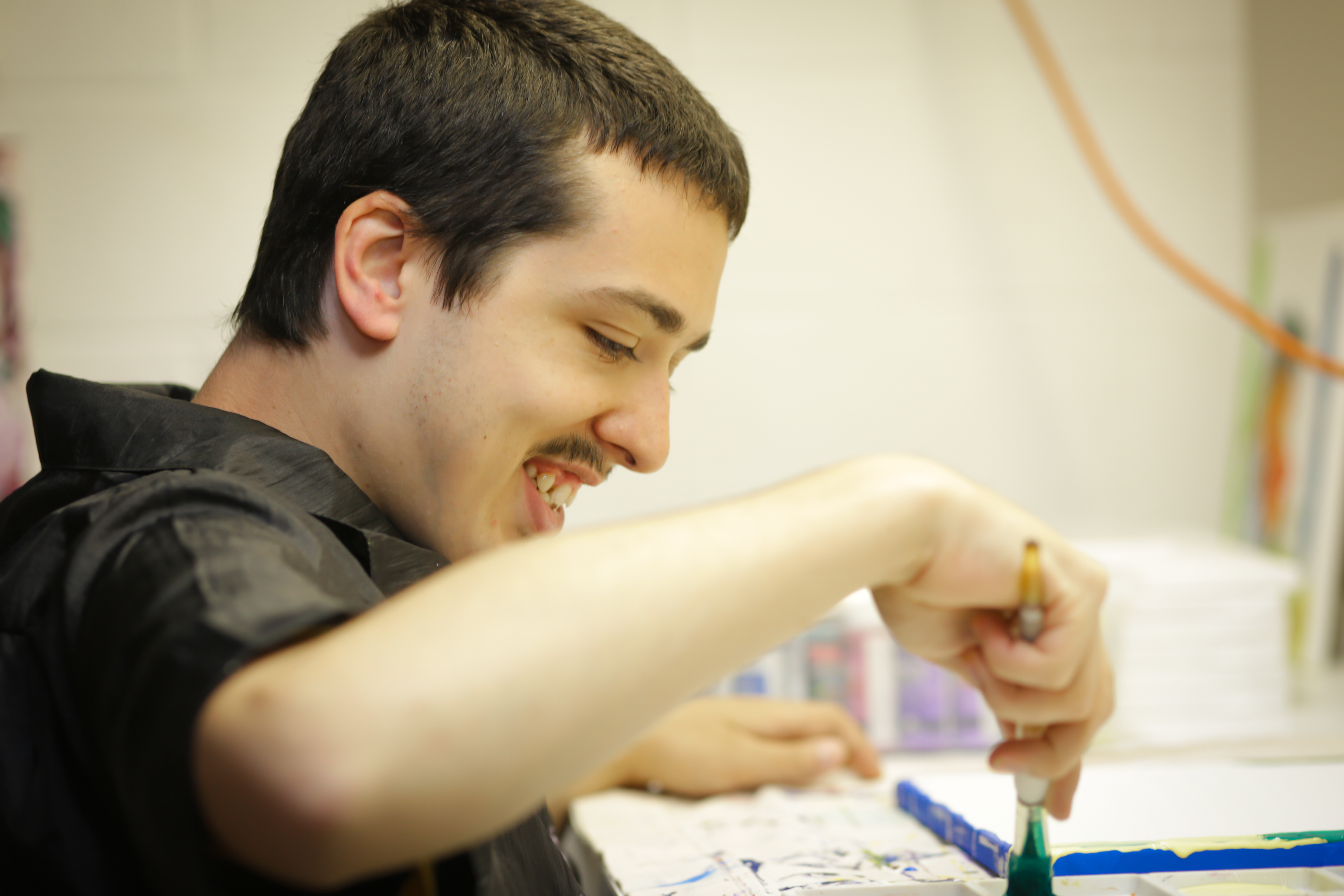 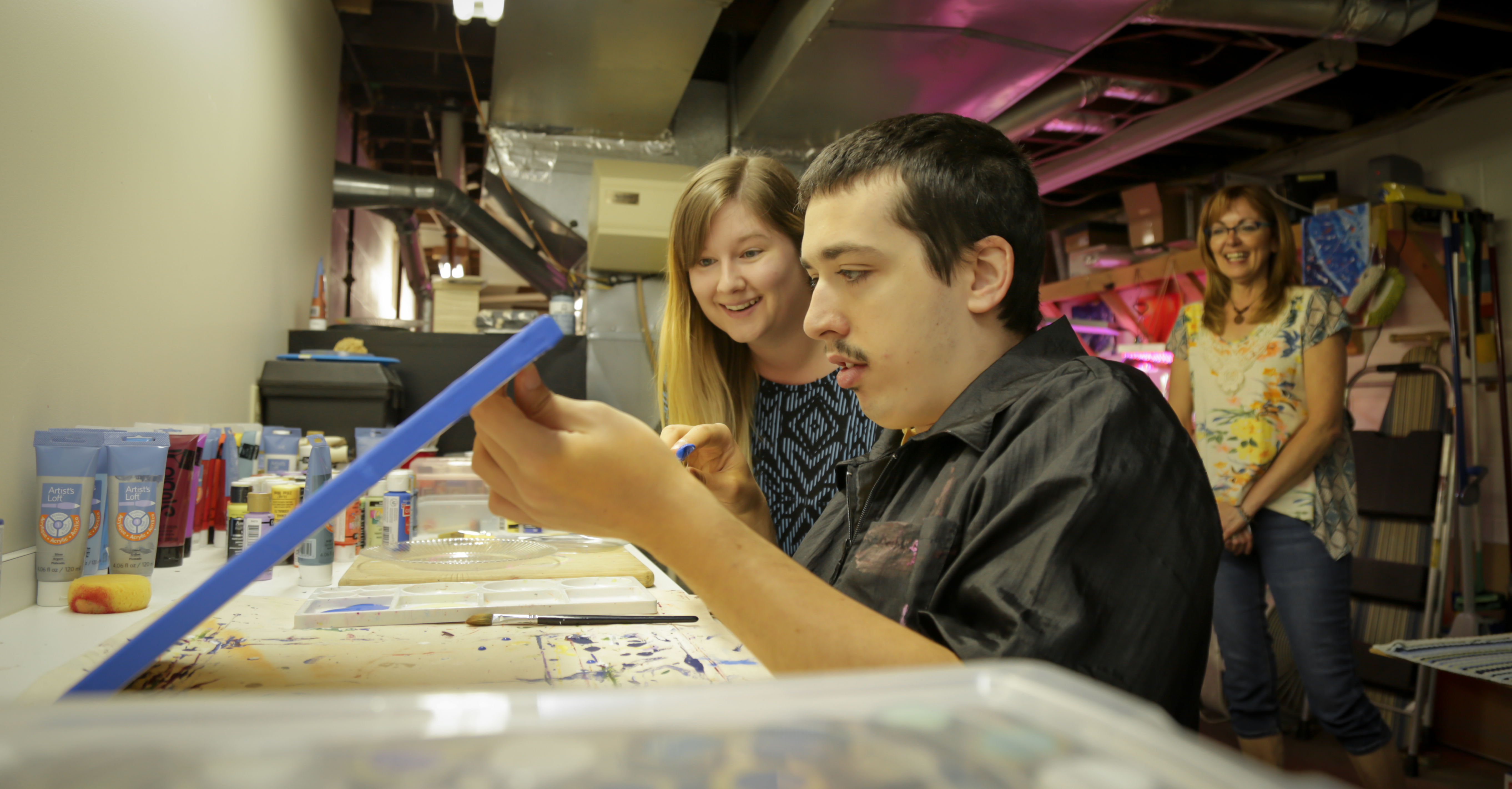 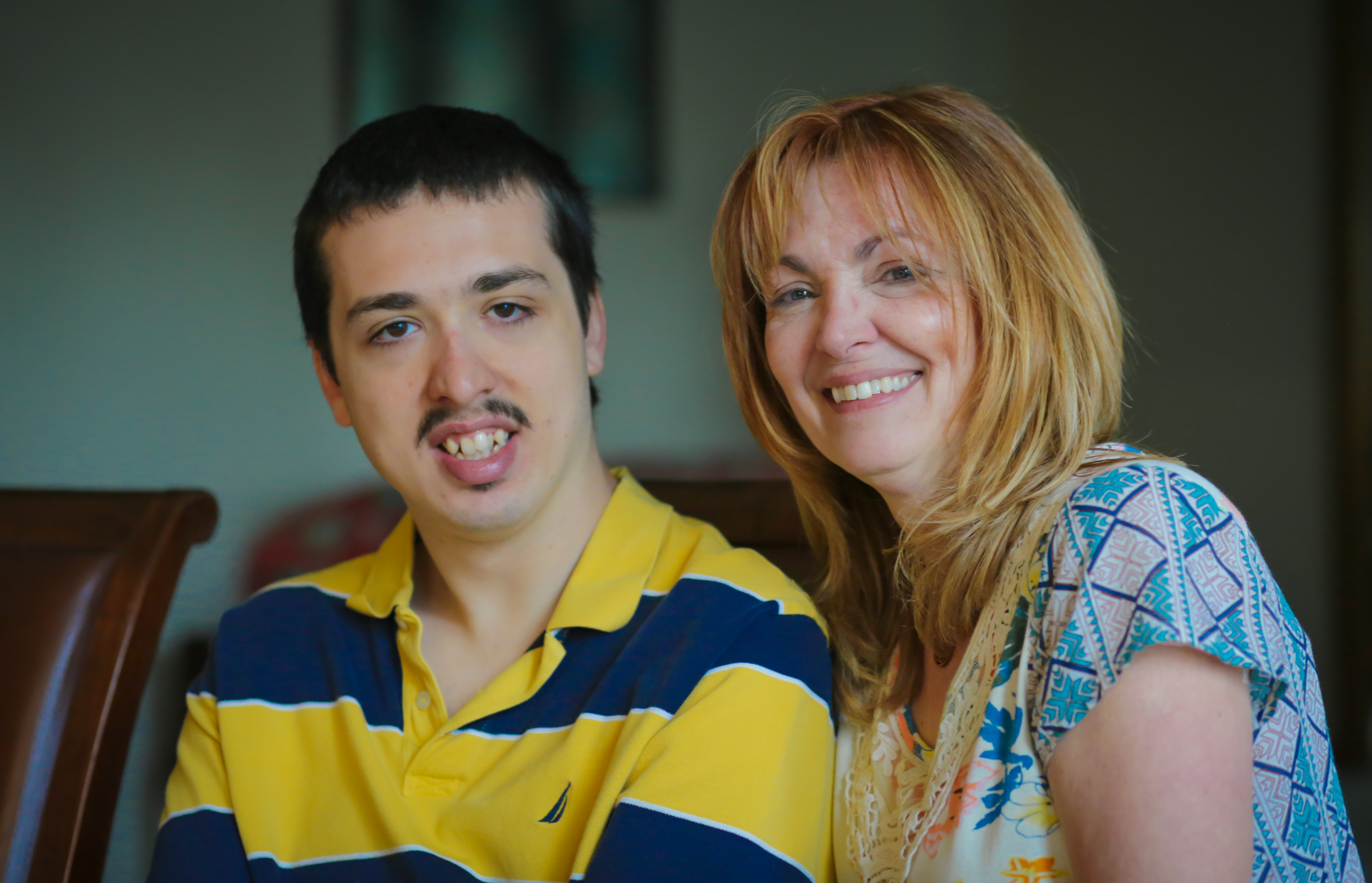 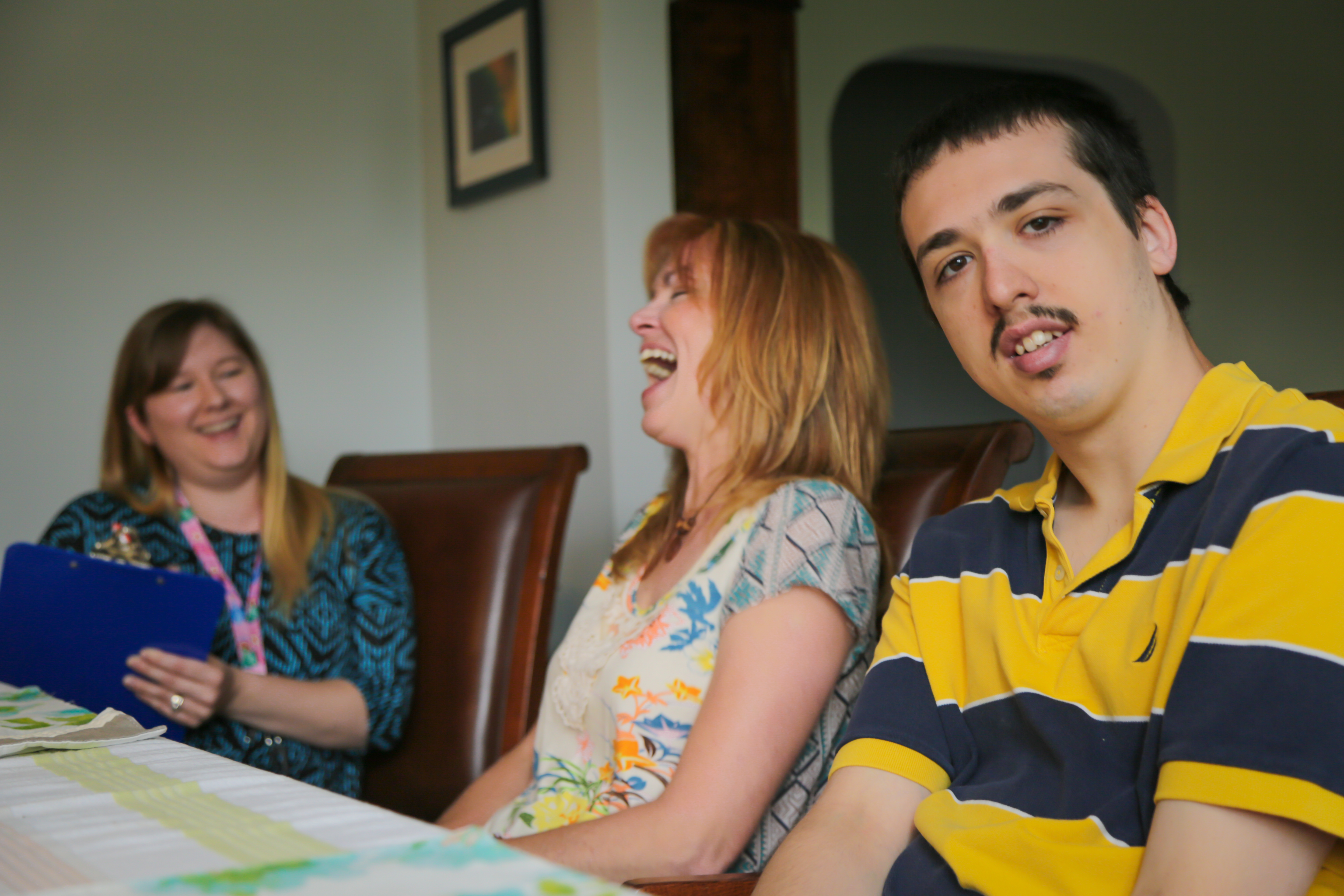 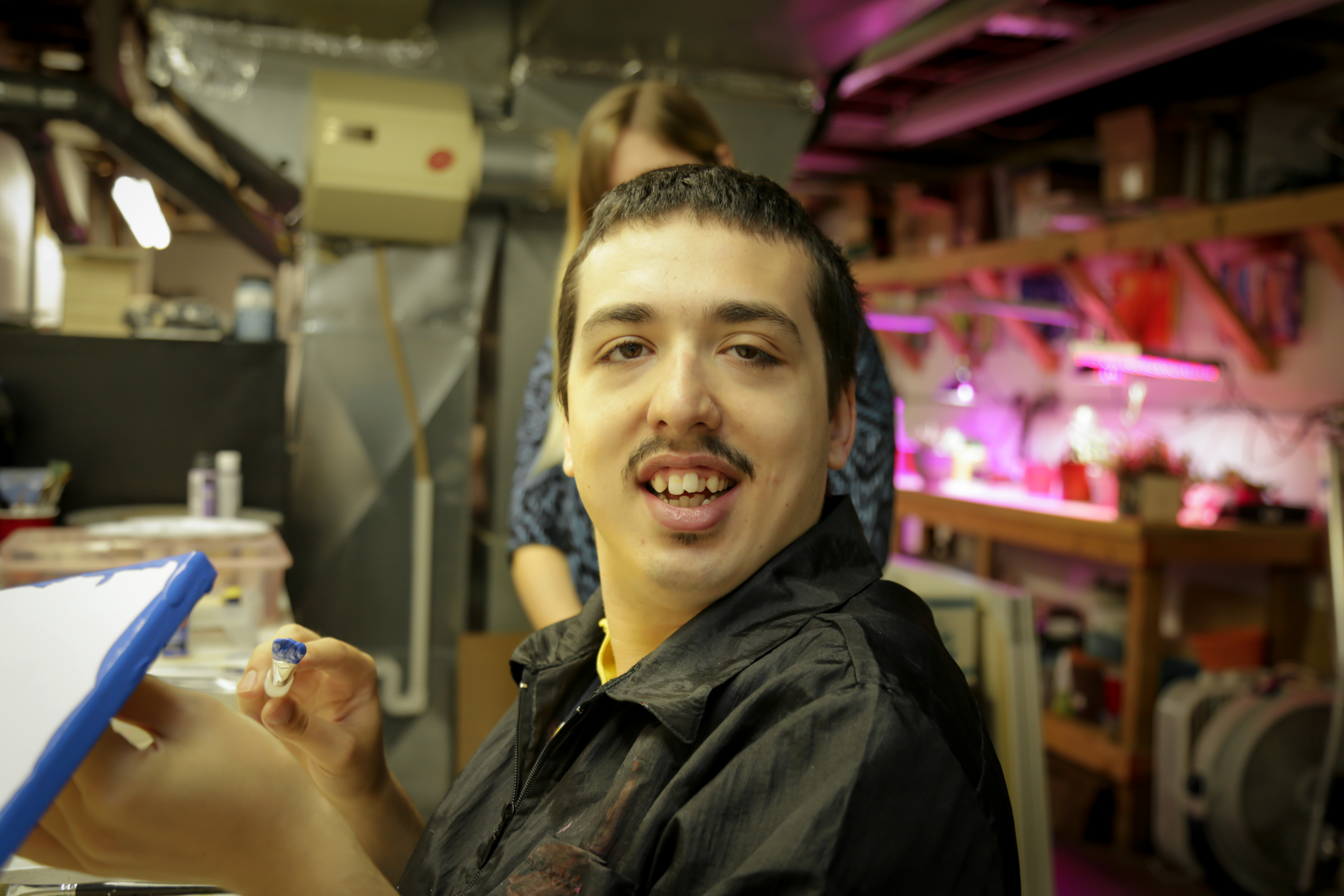