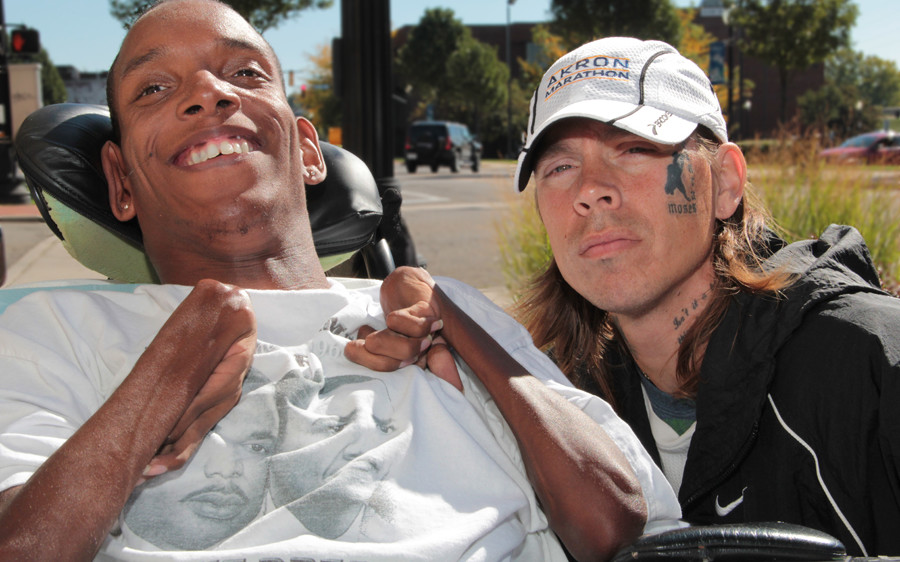 Building A Legacy, Mile By Mile

“Just because you’re in a wheelchair doesn’t mean your life stops!” These are the words of Andre Travis, spoken with great conviction as he prepares for one of the biggest moments of his life. Born with cerebral palsy, Andre has faced many obstacles in his time – but he doesn’t seek sympathy because those obstacles don’t define him. “We can do anything we put our minds to. It’s the tough times that make you stronger,” remarked Andre.

On Saturday, September 28, Andre will be part of the very first push-chair team in the Akron Marathon. After months of planning, coordination and plenty of practice, Andre and his teammate, Jason “Zeke” Petrie, will make history, together.

Zeke provides transportation services to Andre through Total to Care, a day program provider in Barberton, Ohio. “Andre and I became friends in no time. He’s a very likeable guy,” remarked Zeke. Almost a year ago, during some friendly chit chat, Zeke asked if Andre would like to go running together. With Andre’s can-do attitude, he promptly responded, “Hell yes!”

All it took was a single, three mile run for Andre and Zeke to realize they were building toward something bigger. “This race is not about me. It’s about the people who think they can’t do this. Those in hospitals and hospices who haven’t got a chance like this. I’m doing it for them. To show them they can!” exclaimed Andre.

With the Akron Marathon in their sights, Andre and Zeke were determined to achieve their goal. They contacted race officials and were met with endless support. Jennings Cross, Andre’s Service and Support Administrator through Summit DD, reached out to Rick and Dick Hoyt, the famous Boston Marathon push-chair team, to find a proper race chair. “When Andre told me about the marathon with such passion and drive, I knew he needed the best assistive equipment available to get him to the finish line,” stated Cross.

With the pieces in place, all that was left was practice! “We ran a lot! On good days, we’d hit the streets. On bad days, we trained on indoor tracks. There were times I didn’t feel up to it, but Andre pushed me,” Zeke shared. Together, they formed the perfect team. During every run, Andre talks with Zeke, taking his mind off the aches and pains. “I look back and ask, you alright?” stated Andre. “If it wasn’t for him, I wouldn’t be able to do this. He pushes me more than anyone,” said Zeke. Andre and Zeke’s unique partnership was also featured in a recent article by the Akron Beacon Journal and on News Channel 5.

With just days before the race, Andre and Zeke are enjoying some much needed time off. “We’ve been talking a lot about the race and how we will finish. Should we sprint to the finish line or slow down and take in every second of the cheers? I guess we’ll just decide in the moment,” said Zeke to Andre, who was beaming with excitement.

Reflecting on his months of preparation in light of the big day ahead, Andre proudly declared, “God called me to do this. If I die tomorrow, I know we will leave a great legacy.”

Be part the legacy. Join us on race day for continuous updates on Summit DD’s Facebook and Twitter page (follow #AndresLegacy). And be sure to revisit the blog for Andre and Zeke’s results, race photos and their plans for the future.