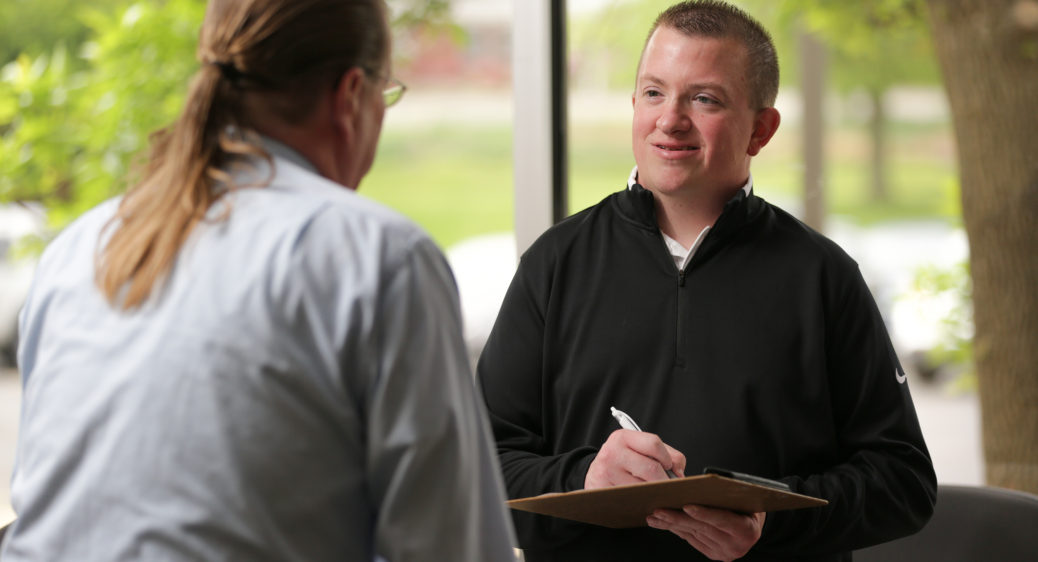 Paying It Forward One Job at a Time

Remember Patrick? He’s the hard-working, motivated, young man who helped change perceptions about people with disabilities working in their communities. Recently, we had the opportunity to catch up with him. You won’t believe how he’s paying it forward now!

When we first met Patrick three years ago, he had just been featured in a Walmart video about supported employment that went viral. (Over nine million views to be exact!) He had already accomplished a lot through the guidance and support of his Summit DD Service and Support Administrator (SSA), his disability service providers, and his family. But Patrick wasn’t finished yet.

Last fall, Patrick began working with Job Developer Mark Cory at Abilities in Action to find full time employment. After a short period of time, the company’s Director, Kimm Kessinger, had the idea to train Patrick as a Job Coach himself. She believed that Patrick could assist others with developmental disabilities at job sites, based on his own experiences.

Mark immediately loved the idea. “I felt Patrick would be a great fit,” Mark recalled. “He relates well with consumers and employers. And his coaching experience is very apparent.”

“I was a little nervous at first,” admitted Patrick about his new challenge. He went on to share his appreciation for the support he received during the transition into his new job from both Mark and his Summit DD SSA. Patrick explained that his SSA, Nakia, connected him to funding to purchase a laptop that he uses in his new job. “Nakia is really supportive of me. I love Summit DD, and I love giving back.”

As a Job Coach, Patrick worked alongside clients who have developmental disabilities. He was a resource to them, demonstrating new skills or observing their work. Patrick took to the new role quickly. His success prompted Mark to propose another move. This time he wanted Patrick to move into a Job Developer role to help find jobs for individuals.

Patrick had his first client within a few weeks. “He had a CDL [Commercial Driver’s License] and he wanted to be a driver,” Patrick recalled about trying to find the right match for his client. “We drove around to all these places.” Fortunately, not long after that, he placed the gentleman at a new job based on the his interests and skills.

“The objective of a job developer is to get [a client] that interview,” Mark added about some of the challenges of a Job Developer. “That [interview] means that you are in the running for that job.”

Patrick explained that just two weeks after visiting the potential employer, a job opened up due to a retirement. “[My client] was next in line,” Patrick said. ”They called him on a Thursday. He went for an interview on Monday, and they hired him right on the spot!”

Mark and Patrick quickly created a game plan to help Patrick support his newly-placed client. Patrick checks in on his client weekly and helps with any concerns that he may have. He follows up with the employer to identify any areas where the gentleman may need more on-the-job assistance. As a Job Developer and Job Coach, Patrick is also helping to establish natural supports at work so that eventually, his assistance on-site will no longer be needed.

Patrick explained his motivation for helping others comes from the support he received and being able to relate to those he is now serving.

“I want to pay it forward and put people with disabilities in jobs,” Patrick stated confidently. “I want to do a lot of things here, and I’m not done yet!”

Check out stories about Joyce, Brad, Uzziah, David or one of the many other My Stories at SummitDD.org!