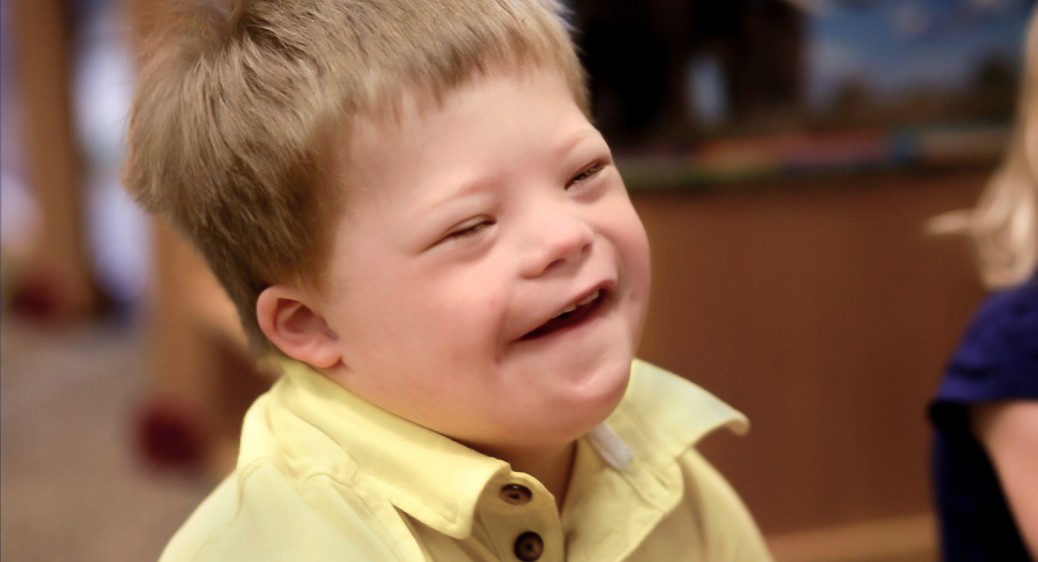 My Story – The Towell Family

Meet Joey. This energetic, fun-loving five year old has a smile that can melt your heart and a swagger that tells you he’s going places. He is dynamic and unforgettable. Joey’s parents, Tom and Jennifer Towell, call him their super hero. You’d never guess that Joey, who has Down syndrome, has faced a multitude of challenges in his mere five years because each time he faces adversity, he and his wide network of supports come out stronger and more determined – like super heroes, you could say.

“For Joe we would go to the moon and back. He’s amazing!” beamed Joey’s mom, Jennifer. “He’d had seven surgeries by the time he was three. He’s this funny little boy and he just makes us so proud every day,” she stated with pride. “Given the opportunity, there’s no ceiling on what he can do!”

Tom and Jennifer say that when they first learned that Joey had Down syndrome they were a little apprehensive and wondered if they had what it took to be great parents for him. “At first it was scary,” Tom acknowledged. “And now it is a blessing. It’s really no different than what you would do for a typical kid.”

“When you have a child with a disability or special needs sometimes it’s hard to ask for help,” Joey’s mom explained. “You want to figure it out yourself, but I think once you realize that there are people and places like Summit DD that are there to help you, that’s part of the battle,” she added. “Just being able to accept the help and being OK with it. I think Joe’s really taught us that it’s OK to not be able to do everything and provide everything – get these other resources.”

The Towells will tell you that one of the resources they found helpful was Summit DD’s Early Intervention (EI) program. Through the EI program, Joey and his parents got the support they needed to help them through Joey’s surgeries, the tools they needed to help Joey make progress toward his milestones, and the connections to other community resources for Joey’s development.

“The best benefits of Early Intervention for Joe and for us was having that contact,” recalled Jennifer about her experience with Summit DD’s EI program. “It was all so new. It was scary and intimidating and so much to keep straight. It was helpful to have someone to talk to, bounce ideas off of and get resources from.”

Joey continued to move forward with hard work and the support of his family and Developmental Specialist. His progress led the family to their next stop along his journey, preschool.

The Towells have the same standards and expectations for all of their children, which is why when it was time for Joey to go to preschool they thought it would be a simple search.  They wanted Joey and his older brother, Tommy, to preschool together and were dismayed when they talked to several preschools who told them they would not be able to support Joey’s needs. After numerous local preschools saying no, the Towells turned to Summit DD’s Community Partnership for Inclusion, or CPI, program.

Summit DD’s CPI program helped the family find a preschool that was a good fit for both boys. Additionally, Summit DD Inclusion Support Specialists offered support to the preschool through education and on-site learning methods. They provided training for the preschool’s teachers and helped make the room accessible for Joey and his classmates. The family has been thrilled with Joey’s progress since joining his inclusive preschool and an inclusive summer camp at another day care provider.

“We go into a classroom and observe,” Inclusion Support Specialist, Lisa Gibson explained about Summit DD’s role to support neighborhood centers. “We help the teacher with strategies, help them with inclusion, and we get to know the entire classroom. It’s not just the child.”  Lisa enjoys her role with the CPI program and the many great children and families she’s met along the way. “Working with Joey has been and awesome experience. He’s self-motivated,” she said with a warm smile. “Joey’s going to do great things!”

Tom described the importance of places like It’s All About Kids and Kids Country, the two inclusive programs that Joey has attended. “From early on he had a personality. He was a very social child. That’s what we wanted to foster,” Tom said. “He learned things from other kids and they learned from him.”

Since being part of their inclusive, community preschools, the Towells have seen Joey’s language skills take off. They’ve watched him transition from gait trainers to walking and now running. They couldn’t be happier with the progress that they are seeing.

The Towell family is looking forward to what the future holds. As their little super hero reaches each new milestone in his life, his parents will continue to be there to love him, support him and make sure that he is connected to resources like Summit DD that will help him succeed.

“That’s always been our goal for Joe, to help him be as independent as he can be,” Jennifer reflected. “And just kind of being there in the background supporting him as needed and using community resources out there to help us help him. We want to help him achieve his dreams, whatever they might be.”

Want more? Check out Jacob’s story, a kind-hearted, go-getter who changes everyone he meets.

Get more information on Summit DD’s Services for Children.